We are a very dynamic, pro-active, and highly organised team of people backed by a financially sound structure that ensures we are always ahead of our competition in the segments of the outbound travel markets we operate in. This allows us both to deliver impressive results to our principals, and quality service to our customers.

To strive to succeed, to be the best and to achieve the best results in all the segments we specialise in each market we operate in.

Top-selling company for cruises in SE Europe, ME & Africa regions

To strive for the growth of our employees – our most important asset, and to strive to deliver the best service and value to our customers. 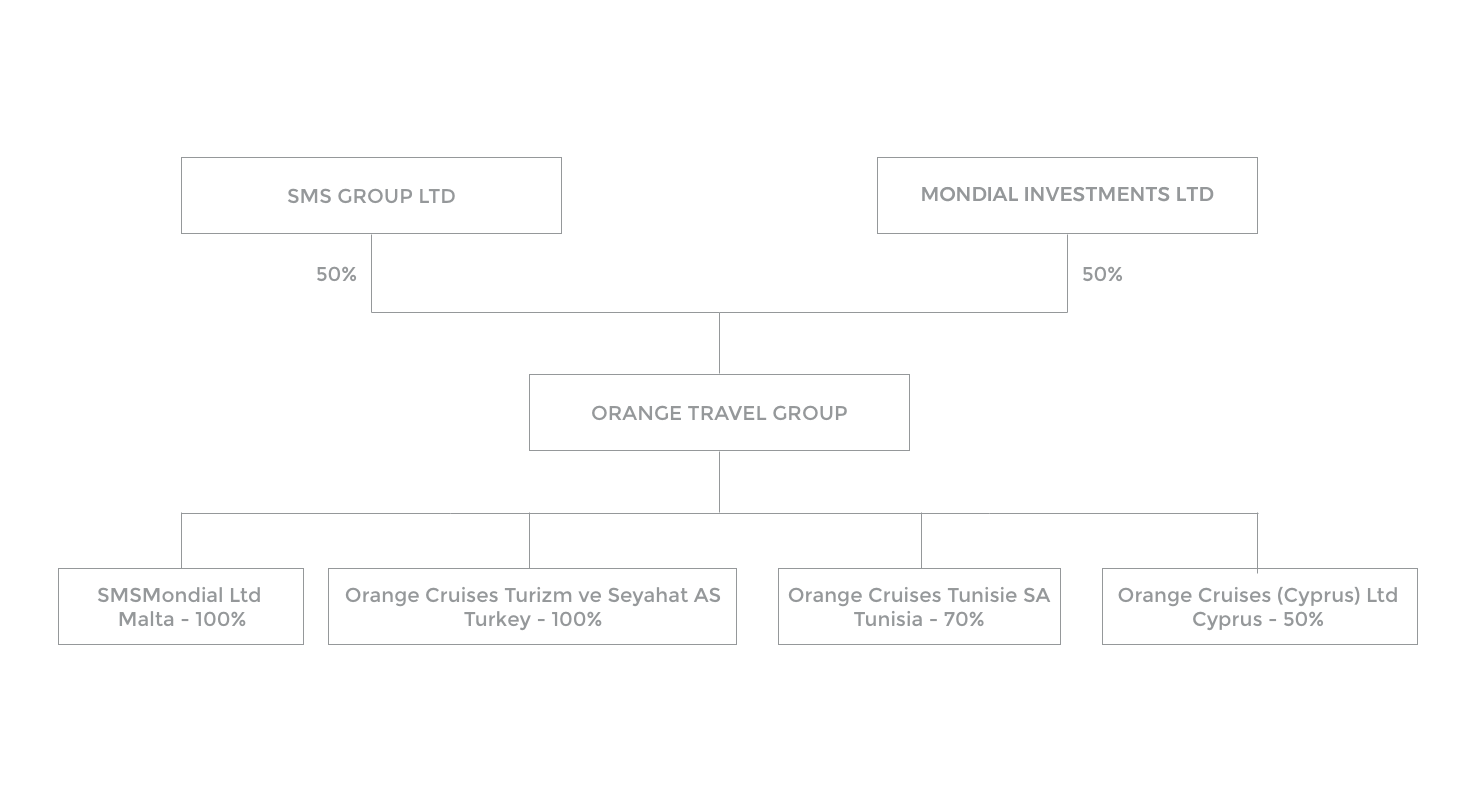 Upon the merger which was completed in 2011, Orange Travel Group Ltd became both a holding company as well as a wholesale tour operator for the Maltese market.

In Malta, the subsidiary SMSMondial Ltd took the role of retail arm which with its six extremely centrally-located branches give the agency an unparalleled distribution network that is completely unmatched by its competitors.

It quickly became clear that the merger was a complete success that resulted in both a new, greatly cohesive team, and a much stronger market position, especially in the distribution of cruise products.

This success prompted foreign expansion into a number of markets, but unfortunately following the Arab Spring revolutions, the Greek economic meltdown, and the Russian-Ukrainian crises, the situation in some of these markets was no longer promising so it was decided to pull out of certain countries in order to concentrate on the most promising places.

In terms of figures, Orange Malta (and its Malta-based subsidiaries) account for about 70% of all sales with which in a normal year yield €17 million worth of sales (in the Maltese market) – probably double of the Company’s closest competitor. The Company (and its sister companies) is particularly strong in the Maltese market when it comes to cruises with a usual market-share of between 60% and 70%. To our knowledge these figures also mean that Orange is the top-selling travel firm selling cruises in the area comprising Southeast Europe, the Middle East and Africa.

Orange Travel Group’s success story goes on. From one year to another, Orange and its subsidiaries attract more and more customers and sales figures continue going up. Financial performance is also very healthy making Orange what is almost certainly Malta’s most profitable travel business thus guaranteeing stability for suppliers and customers alike.

Mondial Travel Agency was set up in 1947 by Anthony Degiorgio whose successors have carried forward the business for over six decades. With an initial share-capital equivalent of Euro200, Anthony and his son Charles operated from a tiny office in Valletta whereby they quickly gained a reputation for organising innovative and reliable sea and coach tour programmes for Maltese holidaying in Europe.

Over the years the family business evolved into diversified fields encompassing also tourism, airline representation, insurance, and shipping only to return back to its origins by the late 1980s and thus once again exclusively concentrate on outbound travel.

Upon taking over the business, the third generation of Degiorgios brought over new ideas which at the time were truly ground-breaking for Malta – these included operating the first ever air charter series out of Malta as well as chartering entire (small) cruise ships. New marketing techniques coupled with a revamped range of products and aggressive pricing – especially as regards to group tours and cruise travel substantially increased the size of the travel agency business.

Expansion meant the opening of branches in some of Malta’s leading towns as well as the acquisition of smaller competitors making Mondial the largest outbound travel company of the best part of the last two decades.

Today Mondial is no longer directly engaged in business activities, instead it has been transformed into a holding company – Mondial Investments Ltd which owns 50% of Orange Travel Group, as well as interests in two other travel companies, in property, and more recently in the hospitality industry.

S. MIFSUD & SONS LTD – or simply SMS as it is more commonly known – is a family business which owes its origins to Orazio Mifsud who had started his commercial activity around 1860 with offices in East Street, Valletta near the Victoria Gate entrance to the capital in the harbour area.

It is interesting to note that Orazio’s business was one of the very few firms in Malta which had a telephone set in 1888 (out of a total of 138 on the island).

A century and a half later the company’s shipping operations were still conducted from the same offices until 2013. With such ancestry SMS can boast to be one of the oldest businesses in Malta today. Orazio’s grandson, the late Chev. Comm. Silvio Mifsud who was a business partner with his brother Paul, established his own business as shipping agent in 1950. The company immediately recognised the importance of travel and tourism as being key industries of the Island and Chev Mifsud’s son, Neville set up SMS Travel & Tourism which soon became a pioneer in these fields.

As years progressed the Group became a financially healthy conglomerate involved in a range of highly diverse areas which included ownership of hotels, a super-market chain, and even a ship, of course along its core travel, tourism, shipping and airline (as Alitalia GSA) ventures.

Today SMS Group Ltd is a highly prestigious business organisation with a healthy portfolio of businesses that include inbound tourism (Malta’s market leader), travel, insurance, shipping, logistics, English language education, property development, corporate services, and a cruise passenger operation with a presence in a number of countries that make it the undisputed number 2 player in the world.